In previous articles told you, we had to create generally 2 separate laser shows running at once at the stadium. The reason is, the audience was on both sides of the stadium. 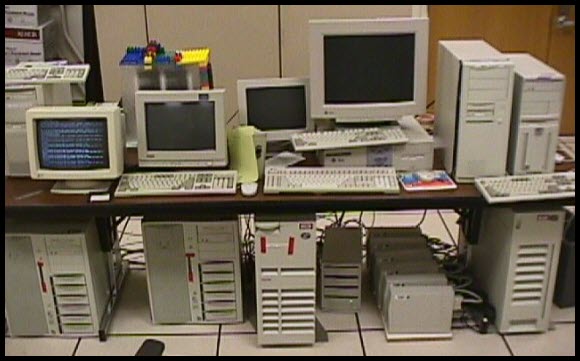 Pic: While your clients might be astonished by big computers, we think it’s stupid and impractical.

Also, it doesn’t help, if you disconnect Ethernet cable and your software crashes. That would really piss me off. Simply said, I like to use controllers, which allow me disconnecting my small notebook from Ethernet, move to different location and connect the Ethernet elsewhere. Since we’ve used Ethernet controllers, we have Ethernet switches everywhere, so I could connect my notebook wherever I wanted.

Or there’s even better option. For the setup phase, the fluency of the animation is not necessary. Thanks to that, we can use standard wireless routers. My notebook is connected via Wi-Fi to the router and I can walk freely around the stadium and setup all my stuff wherever I want. Of course, I would not use it to play the show, the cable is safer. But again, for the setup phase, it’s great. But again, you need to use controllers and software, which don’t crash, when Ethernet cable is disconnected 🙂 ..

Wireless router can save you a lot of walking. Unless you want to lose some weight.

And yes, a little marketing here – you can connect/disconnect Ethernets while the show is even running using Moncha/Fiesta – they don’t really care. Because it’s the right way.

In the next part I give you a little list, what we focus on, when doing final adjustments.