Using 50 or even more lasers using single computer and single software was unimaginable not so long time ago. But this is not a problem anymore using latest computers. You can check the following video about how to setup so many lasers in your Moncha workspace.

How to connect so many laser systems?

Our client decided to use 50 lasers in one club. There was a requirement to be able to control the laser show software using DMX/Art-Net, so they can control all the club lighting from one DMX console. They could of course use Moncha devices using Art-Net and trigger the content from SD card. But such solution would involve quite a lot of uploading to SD cards (although that’s quite easy in Moncha). That’s why we suggested to use DMX just to trigger scenes directly from Moncha software. This is the hardware setup we suggested:

The reason why we’ve suggested number of switches to keep as low as possible is simple – the more Ethernet switches you use, the higher the latency, the lower the network/Ethernet performance. Although using 1GBit switches the performance might be great anyway, no matter how many there are in a way between the computer and the Moncha.lite 2 device.

In the schema you can see only Moncha.lite 2. But you can mix any kind of our devices in your laser show setup. It doesn’t matter if it’s Moncha.box 2, Moncha.go 2 or The Upgrade. For the software they are all the same. 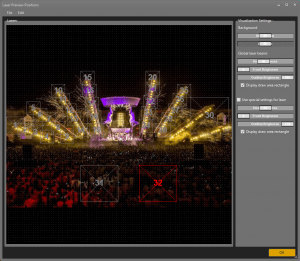 Thanks to 3D accelerated laser preview you can enjoy the laser show even without lasers :).

Why not using DMX and SD-card controlled laser show controllers?